Development continues on Chebucto's wireless node software. Stability of the wireless nodes continues to be an issue and the software is undergoing yet another re-design. Tests of the new software design will take place this week.

Development of the Chebucto Wireless project has been slow. There have been physical stability issues with donated hardware, driver issues with wireless network cards working under Linux, temperature issues with transmitter hardware and much general bug-fixing. There has been a lot of progress made however and in developer Johnathan Thibodeau's words, "We are closer than ever before to the finished product".

There has been zero development money from any outside source and all work on the wireless project has been in addition to the regular technical maintenance that Chebucto requires to keep operating.

The Chebucto Community Net plans to bring non-profit high-speed Internet to the metro Halifax area by building a mesh network of wireless nodes hosted by users themselves.

The areas to be served by the new wireless access will be determined by the residents of metro themselves.

The Chebucto Community Net Board of Directors has had two members resign. New Board member Matthew Newton, who was appointed to the Board after last year's Annual General Meeting to complete the second year of resigned Board member Tom Daly's two year term tendered his resignation at the beginning of February 2008. 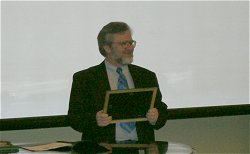 Long-time Chebucto volunteer and Board member Ed Dyer has resigned from his multiple posts as Vice-Chair of the Board effective May 2008, as Chair of the Technical Committee and as Chebucto Postmaster. He was elected to the Board for his fourth consecutive two year term at the April 2007 Annual General Meeting. Long-time Chebucto volunteer and technical staff Johnathan Thibodeau will be taking over the Technical Committee Chair and sharing Postmaster duties with Andrew D. Wright.

Ed Dyer, one of the last three original Chebucto volunteers still actively involved with the running of the community net was recognized several times over the years for his volunteer efforts with Chebucto. He will be very sorely missed and we all wish him the very best for the future.

Spam levels remain high two months after the Christmas season peak. The amount of spam (unsolicited commercial email) doubled between August and December 2007. Currently more than 710,000 messages are being received each day, with between one and three per cent being legitimate mail.

Chebucto's mail filtering servers have been keeping up with the ongoing flood of junk mail, which has caused higher than normal system loads and congested mailing lists, creating added work to administer them. The spam, coming from an ever-growing network or botnet of hijacked home and business computers on high speed connections, doubled last year and the year before.

Users on high speed connections should make sure their Windows Operating System software is up-to-date, have an up-to-date antivirus program, and are recommended to use a router between their computer and their high speed connection as a firewall. It should go without saying that under no circumstances should anyone ever buy something from a spammer or send money to a spammer, but clearly enough people do to keep the whole criminal enterprise in action. Users at home or at business on a high speed connection who think their computer has become slower should download fresh antivirus software and use it to scan the entire contents of the computer.

Chebucto Community Net's computer advice column The Mousepad celebrated its fifth anniversary in January. There have been 125 Mousepad columns written since the first column was published in the Sunday Herald in January 2003. Originally written by Mark Alberstat, since June 2006 it has been written by Andrew D. Wright. The column is currently published in local newspapers Bedford-Sackville Weekly News, Dartmouth-Cole Harbour Weekly News and Halifax West-Clayton Park Weekly News. Appearing every two weeks, subject to space limitations, The Mousepad offers a mix of answers to user computer questions and how-to columns for computer users looking to broaden their computer horizons.