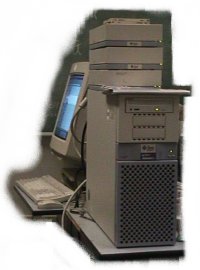 Chebucto staff and volunteers have worked around the clock to figure out why Chebucto's main server has mysteriously started shutting down unexpectedly. The server, which has been in flawless service since 2003, controls Chebucto email sorting and access, and hosts the majority of Chebucto's web pages. Each time the server is shutdown improperly it takes up to three hours for it to check and correct hard drive errors before users can log on to it.

In early July 2008 the main server was upgraded with more memory and two faster CPUs. There was an early problem with overheating which appeared to have been fixed by leaving the server case open and directing cold air towards it. After changing various components with spares and still seeing the mysterious shutdowns, it is now believed that the problem may be with overheating from one of the two CPUs and the main server is currently running as a single CPU machine.

User email has been stored on the three mail scanning servers while Chebucto's main server has been offline. That accumulated email is being delivered as fast as the main server can process it. Delivery of the backlogged email is expected to take more than 12 hours.

The strategy is to watch the main server closely over the next few days with an eye to replacing it with a more powerful 4 CPU server.

UPDATE 11 PM, August 19th: The main server has been set up with two CPUs again and repositioned so it gets a direct feed of cool air from one of the machine room air conditioners. The mail queue is dropping from a peak of 1.35 million messages at 8:15 PM.

Chebucto Wireless is online. Hardware to construct wireless nodes is on order and a number of node host candidates will be contacted in the next few weeks about becoming live nodes.

There has been zero development money from any outside source. All work on the wireless project has been in addition to the regular technical maintenance that Chebucto requires to keep operating.

The Chebucto Community Net now brings non-profit high-speed Internet to the metro Halifax area with a mesh network of wireless nodes hosted by users themselves.

The areas to be served by the new wireless access will be determined by the residents of metro themselves. There's a map here.

Chebucto Community Net's computer advice column The Mousepad celebrated its fifth anniversary in January. There have been 130 Mousepad columns written since the first column was published in the Sunday Herald in January 2003. Originally written by Mark Alberstat, since June 2006 it has been written by Andrew D. Wright. The column is currently published in local newspapers Bedford-Sackville Weekly News, Dartmouth-Cole Harbour Weekly News and Halifax West-Clayton Park Weekly News. Appearing every two weeks, subject to space limitations, The Mousepad offers a mix of answers to user computer questions and how-to columns for computer users looking to broaden their computer horizons.